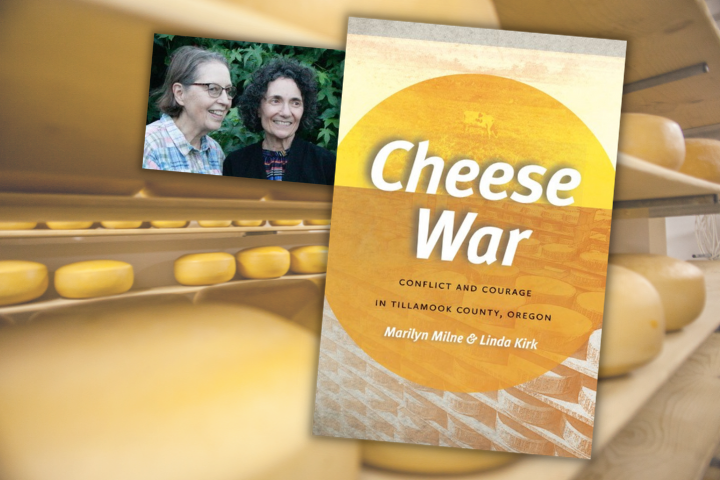 Did someone say cheese?

This is a live webinar. Register for Zoom link.

In the 1960s, the dairy farmers of Tillamook, Oregon were at war with themselves. Cheese War co-authors and sisters Marilyn Milne and Linda Kirk witnessed the fight while they grew up on a local farm. Join them for a virtual reading as they describe farm life and tell the story of how the Tillamook cheese industry survived its management crisis – a fight that included lies and secrets, spies, financial skullduggery, numerous lawsuits, a shoving match and even a death threat – to become the iconic Oregon brand it is today. We’ll also learn about Central and Eastern Oregon’s cheesemaking history.

Sisters Marilyn Milne and Linda Kirk were children of the Cheese War. In elementary school, they saw how it absorbed their parents, Barbara and George Milne. As adults, they realized they actually knew very little about it and set out to learn the real story. The authors have conducted years of research through the archives and newspapers of Tillamook County and conducted numerous interviews and oral histories of key players in the Cheese War and their families. As Americans become ever more interested in food supply chains and ethical consumption, here is a story of the very human factors behind one of Oregon’s most famous brands.